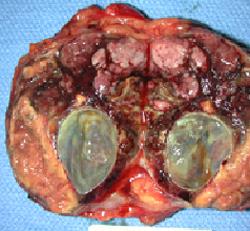 Catecholamines are hormones that increase the heart rate, blood pressure, rate of breathing and amount of energy available to the body. Adrenaline is the most common and well-known catecholamine. The adrenal medulla releases extra adrenaline in response to stress. This increase is known as the "fight or flight response"—i.e. the body is ready to fight or run.

However, as we learn more about this rare disease, we are discovering that some of these numbers may be higher. In fact, research shows that up to 25% of pheochromocytomas are inherited.

Even after removing the tumor it is often impossible to tell the difference between a malignant and benign pheochromocytoma under the microscope. The only definite way to tell if it is a malignant pheochromocytoma is if there is spread into nearby organs (i.e. local invasion), spread to distant sites like the lung and bone (i.e. metastases), or cancer that comes back (i.e. recurrence).

When pheochromocytomas are located outside the adrenal glands, they are called paragangliomas. (See Paraganglioma) Outside the adrenal glands, these tumors can be found anywhere along the sympathetic nervous chain. The most common extra-adrenal site is a point on the abdominal aorta (the largest artery in the abdomen) called the organ of Zuckerkandl.

Is this a genetic problem?

Most pheochromocytomas are not genetic in origin, but the only known risk factor is a family history of them; the rest of these tumors do not have a known cause (i.e. are spontaneous). About 25% of pheochromocytoma are inherited or familial. Although there are many rare syndromes associated with pheochromocytoma, the most common are:

The Multiple Endocrine Neoplasia type 2A and 2B (MEN 2A and 2B) are genetic syndromes caused by a problem (i.e. mutation) in the RET gene.

Neurofibromatosis type 1 is also known as NF1 or von Recklinghausen's disease and is caused by a mutation in chromosome 17. This syndrome includes coffee-colored skin spots (café au lait lesions) and nerve tumors in the skin. Only 5% of these patients have pheochromocytoma (usually in only one adrenal gland) or paraganglioma.

Familial paraganglioma syndrome is caused by mutations in the succinate dehydrogenase gene (SDH). There are a number of different mutations including the B, C, and D mutations, each of which causes different forms of the disease.

Many of these syndromes are autosomal dominant leading to a 50% chance that the children of patients have a 50% chance of developing the disease. Genetic testing should be done for patients who have:

Family members should have genetic testing only if the patient is found to have a genetic mutation. Genetic counseling should also be given to help patients and families understand who should get tested, what testing involves, and work through any issues that may arise because of it. The Adrenal Center helps patients and at-risk family members to receive genetic counseling and testing with the expert geneticists in our program.

Patients with pheochromocytoma typically present either with classic symptoms (40%), with an incidental finding (40%), in pheo crisis (10%), or during evaluation of familial disease (10%).

The classic symptoms of pheochromocytoma include: high blood pressure, rapid heart rate (palpitations), headache, flushing, and sweating. In addition, patients may feel like they are having an anxiety or panic attack (difficulty breathing, weakness, a feeling that something "bad" is happening). Other less common symptoms may include pale skin, blurred vision, weight loss, constipation, abdominal pain, high blood sugar levels, low blood pressure, and psychiatric disturbances. If these symptoms happen during a medical procedure, operation, after eating certain foods, or taking certain medicines like monoamine oxidase (MAO) inhibitors, the patient should be tested for pheochromocytoma right away. However, it is important to note that 40% of patients will present without any clear cut symptoms, but rather an adrenal tumor that was found on an imaging test done for another reason or at autopsy. (See Adrenal Incidentaloma)

Patients in pheo crisis have had a massive release of adrenaline that causes major health problems including stroke, heart attack, heart failure, multiple organ failure, coma, and even death. These patients often require admission to an intensive care unit.

Patients who are suspected of having a pheochromocytoma should be tested to see if they have too much catecholamines in their system. Catecholamines last only a short time and are quickly broken down by the body into molecules called metanephrines. Metanephrines last much longer and are easier and more accurate to measure than catecholamines. Catecholamines and metanephrines may be measured in the blood or in a 24-hour collection of urine. Depending on the patient's age, family history, and other factors, plasma (i.e. blood) and/or urine tests will be ordered. Levels that are at least twice the upper limit of normal mean that the patient is almost certain to have a pheochromocytoma. For patients with an adrenal incidentaloma, if the metanephrine levels are between 1 and 2 times the upper limit of normal, there is a 30% chance of having a pheochromocytoma. It is important to note that certain medications can interfere with these tests, including some antidepressants and other medications for psychiatric diseases and high blood pressure. In addition, alcohol withdrawal, sleep apnea, and major stress like an operation or significant illness can interfere with test results.

After confirming the diagnosis of pheochromocytoma, imaging tests will be done to find the location of the tumor(s). Typically a CAT scan or MRI will be done first. These imaging tests can also help find out if there are any tumors (i.e. paraganglioma) outside the adrenal glands. If the CAT scan or MRI does not identify a tumor, a special nuclear medicine scan called MIBG scan may be done. The MIBG (metaiodobenzylguanidine) scan uses a weakly radioactive particle that "homes" into the tumor and causes it to light up on the scan. MIBG scans are very specific to adrenaline-producing tumors and can also help to find paraganglioma and metastatic disease (cancer that has spread outside the main tumor). A PET (positron emission tomography) scan may also be done. This scan uses a weakly radioactive particle that "homes" into metabolically active tumors (i.e. tumors that are using lots of energy and sugar). This test is particularly good for localizing paragangliomas.

Once an adrenal tumor is found, it must NOT be biopsied. Doing a biopsy of a pheochromocytoma or paraganglioma can lead to a pheo crisis and possibly even death. 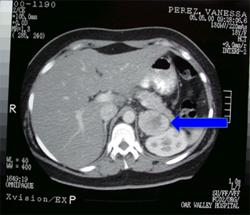 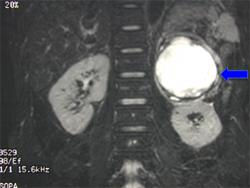 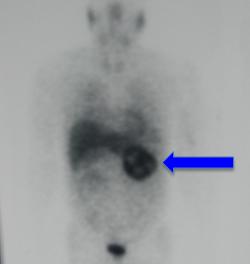 The best treatment for pheochromocytoma is to remove it surgically. One of the few exceptions to this rule are patients who have other medical problems that are so dangerous that they would not survive an operation. In general, medical therapy is only effective temporarily and patients can "breakthrough" the medications.

Preparing for an operation:

Before an operation to remove a pheochromocytoma, the patient must be properly prepared with certain medications to block the effects of adrenaline that will be released during the operation. This preparation must be done by a doctor (ex. endocrinologist, endocrine surgeon, or hypertension specialist) with experience managing patients with pheochromocytoma.

Adrenaline causes the blood vessels to clamp down (i.e. vasoconstriction). As the blood vessels clamp down, the blood pressure goes up. The body tries to maintain a normal blood pressure by getting rid of extra fluid through the urine. This situation leads to dehydration. In order to reverse and block this vasoconstriction, a medication called an alpha-blocker will be given for at least 10 to 14 days before the operation. The alpha-blocker causes the blood vessels to relax and prevents them from clamping down again when more adrenaline is released. As the blood vessels relax, the patient's blood pressure can become dangerously low because of the dehydration, especially after the pheochromocytoma is removed. It is very important to fix the dehydration by drinking plenty of extra fluid and eating a little extra salt in the diet in the weeks before the operation as the alpha-blocker is started. The alpha-blocker dose will be increased until the patient has symptoms such as a stuffy nose, fatigue, mild orthostasis (i.e. feeling a little lightheaded when getting up). In the few days right before the operation, a beta-blocker may be given to slow a fast heart rate. However, a fast heart rate may also be a sign that the patient needs to drink more fluids. Some doctors will use a calcium channel blocker instead of alpha-blockers to prepare the patient. In rare cases when the blood pressure cannot be controlled with these drugs, a drug call metyrosine may be used to completely stop the production of adrenaline 4 days before surgery.

Even with the best pre-operative preparation, the patient may still have wide blood pressure changes, irregular heart rhythms, and bleeding. For this reason, it is critical that the surgical and anesthesia teams are in constant communication and have a significant experience in treating pheochromocytoma. Most pheochromocytomas can be removed laparoscopically except for very large tumors and those that are clearly malignant. At the Adrenal Center, we perform 98% of these operations using minimally invasive techniques (i.e. making 3 or 4 very small incisions and a small camera with special instruments). (See Adrenal Surgery)

If you are dealing with an adrenal issue, our team at the Columbia Adrenal Center is here to help. Call (212) 305-0444 or request an appointment online.