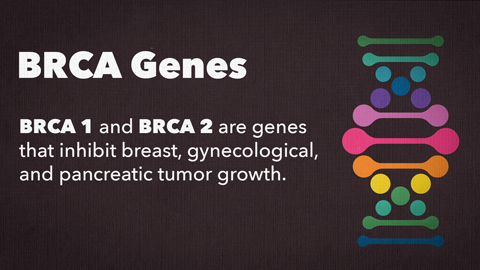 What are BRCA Genes?

The Role of the BRCA Gene in DNA repair

To understand the BRCA1 and BRCA2 genes, we first need to understand DNA and how it works. DNA stores genetic information in every cell in the body. Think of DNA as a cookbook that contains recipes. Since your body does a lot of cooking, these recipes get used over and over again. That frequent use of the DNA cookbook leads to pages getting torn and recipes obscured. In fact, our DNA is continually hit by both internal and external factors that cause damage. Common external sources of damage include UV radiation from the sun and smoking.

Your body has a natural way of fixing the damage from continual assaults on the DNA, but this process isn't always perfect. Just as accidentally replacing "teaspoon" with "tablespoon" in a real recipe can throw off the entire dish, small errors in the DNA repair process can have big consequences and result in many diseases, including cancer.

BRCA1 and BRCA2 are genes that play an important role in repairing DNA when it gets damaged. If the BRCA genes are themselves damaged, they can no longer do their job, and the unrepaired DNA can, in time, lead to cancer.

Some people inherit malfunctioning—or mutated—BRCA genes from their parents. Having a mutated BRCA gene puts people at an increased risk of developing several types of cancers, including breast, ovarian, and others.

Other cancers are also associated with mutations of BRCA1 and 2, including melanoma and breast and prostate cancer in men. If a person has inherited the BRCA2 gene mutation from both parents, they face an increased risk of childhood solid tumors and acute myeloid leukemia.