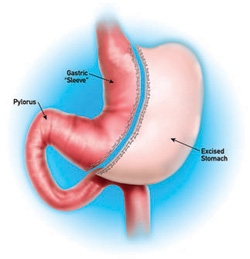 Though she’d been into fitness for most of her life, Gina C., an administrator at a hospital, suddenly found herself putting on unhealthy amounts of weight as she approached her fiftieth birthday. After making every attempt to combat her weight gain in other ways, she finally decided that she would consult the bariatric surgeons at The Valley Hospital, certified as a center of excellence by the American Society of Metabolic and Bariatric Surgery. She arranged for laparoscopic gastric banding surgery with Beth Schrope, MD, Director of the Center for Metabolic and Weight Loss Surgery at The Valley Hospital.

It wasn’t until her final consultation with Dr. Schrope, however, that Gina decided to ask about an alternative treatment called sleeve gastrectomy, which involves removing about three-fourths of the stomach. The name “sleeve” comes from the appearance of the stomach afterwards; instead of looking bulb-shaped, the stomach is so much smaller and slimmer that it almost looks like a continuation of the esophagus.

Gina was thrilled to hear that the minimally invasive procedure, though a slightly longer operation, seemed to be just as effective, if not more effective, than laparoscopic adjustable gastric banding — but with a much lower rate of long-term complications (due to the reoperation rate after banding). No reconnecting of the intestines would be necessary, as in a gastric bypass, nor would an artificial device need to be implanted and regularly adjusted, as required by gastric banding. Most importantly — in Gina’s eyes, at least — one of the procedure’s unique effects is to substantially reduce the body’s production of the hormone ghrelin, which is responsible for stimulating hunger. “When I heard that [the sleeve gastrectomy] removes ghrelin, I raised my hand: I’m in!” Gina said. “The removal of ghrelin really needs to be investigated by anybody with an addiction to food — it’s amazing.”

The catch about sleeve gastrectomy, though, is that it’s permanent. A gastric band can be removed, and a gastric bypass undone — but after actually removing a portion of the stomach, as in the gastrectomy, it cannot be put back. As convinced as Gina was that sleeve gastrectomy was the way to go, Dr. Schrope insisted that she take a week to think about whether she wanted to make this irreversible decision. Gina did so. At home, she went to online forums and message boards, chatted with others who had gotten the procedure, and carefully weighed all of her options. She remained convinced that sleeve gastrectomy was the best choice for her.

On October 4, 2011, Gina had her operation. It went wonderfully. Even the unexpected presence of a hiatal hernia hardly slowed Dr. Schrope, who easily repaired the hernia as she went. The whole procedure was done laparoscopically, meaning that there was not so much an incision as a set of five tiny holes. Only a couple hours after the operation, Gina was walking around. Two days later, she went home.

Since the surgery, Gina, an Italian, has lost the taste for pasta, carbohydrates, and starches; the effects of the lack of ghrelin, she says, are extremely noticeable, and wonderful. More importantly, perhaps, she has been steadily losing weight. She’s already lost 50 pounds — a good 20% of her body weight — and she says that although she’s already very happy with where she is now, it’s quite possible that she’ll continue to lose weight. She’s also been able to stop taking all the medications she’d needed before her surgery (namely, those for fibromyalgia, arthritis, and high blood pressure) because her dramatic weight loss has reduced or eliminated her symptoms.

All in all, Gina is incredibly pleased with the results of her operation: “I’m over the moon about it,” she said, “I’m the cheerleader. My results are fantastic, I’m off all my prescription medications, and I couldn’t be happier.” She’s even bringing exercise back into her life again, and can’t wait to go skating and biking once the weather warms back up in the spring.