After Plication, a Rock Singer Hits the Road Again 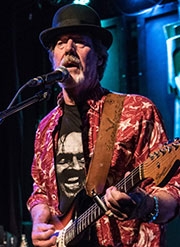 Charlie Adams was always active—lifting weights, running, and even hiking across the United States. But his passion lies in music. Charlie, an energetic 71, is a singer who has fronted many rock bands over the years. In 2015, he started to get winded easily and soon his health and his musical career were suffering.

Charlie first started to notice the change during his workouts. After a few reps with weights, or a few minutes on the treadmill, he was struggling for air. Soon even getting up and down the stairs was challenging.

Being able to finish a phrase is essential for a singer and that was becoming difficult, too. “I would have to stop in the middle of a verse to catch my breath,” says Charlie.

A pulmonologist told Charlie he was only using 50 percent of his lung capacity due to a problem with his phrenic nerve. The phrenic nerve signals the diaphragm to contract and move downward, making room for the lungs to fill with air. That same nerve also signals the diaphragm to expand upward, forcing air out of the lungs. In addition to struggling for breath, people who have trouble exhaling fully are at risk for lung infections like pneumonia.

Charlie’s pulmonologist couldn’t correct this condition. So he suggested management techniques and prescribed an inhaler, and for the next two years, Charlie stopped singing the songs he loved.

In 2017, he came to Dr. Mark Ginsburg, director of Columbia’s Diaphragm Center and the world’s leading authority on minimally-invasive procedures to restore the function of the phrenic nerve.

In an operation called a plication, Dr. Ginsburg was able to tighten Charlie’s diaphragm, leaving his lungs more room to expand. Charlie noticed a difference immediately, and over time he continued to improve. Three months after surgery, Charlie had a 25 percent increase in breathing capacity, and at six months, he had a 40 percent increase.

Today, Charlie is using 80 percent of his total lung capacity--not far off from healthy adults his age, who tend to be using roughly 90 percent.

The best part? Before the year was out, Charlie could sing again. He performed his first show a year after surgery and has since released a brand new album, playing guitar as well. “I was a little nervous,” he says, “but the songs came easy.”

Learn about The Diaphragm Center here