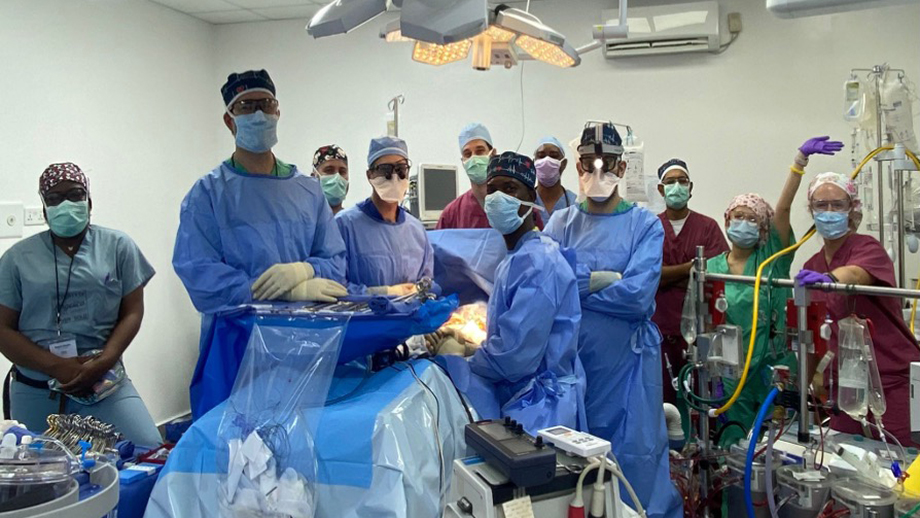 For a country of 211 million people, there are only 100-130 heart procedures completed in Nigeria each year. Meaning, less than 0.00006 percent of the population have access to life-saving cardiac surgery. Adults make up the vast majority of this minuscule cohort, children fare even worse with virtually zero care available for congenital heart disease.

Due to many factors—the most significant currently being a poorly developed healthcare system and the heavy strain of several recent epidemics—Nigerians face nearly insurmountable odds to receive the heart care they need.

This massive medical deficit compelled trauma surgeon Vincent U. Ohaju, DO, to start the Vincent Obioma Ohaju Memorial (VOOM) Foundation. Dr. Ohaju is the Chief of Surgery and Medical Director for Trauma Services at CHI St. Joseph Health in Bryan, Texas, but he is originally from the town of Ihitte, in South Eastern Nigeria.

Along with almost every Nigerian today, the lack of medical care has impacted him directly. He has witnessed friends and family suffer under inadequate access to critical and life-saving treatments, including his father who passed away at 56 due to complications of pulmonary aspiration. A simple procedure readily available anywhere in the United States could have saved him.

Since its founding in 2004, VOOM has created partnerships with teaching hospitals, grown its educational and training programs, built a free-standing private hospital, and is developing quality measures and standards of care. Additionally, and perhaps most significantly, VOOM sends multiple cardiac surgery missions to Nigeria every year.

Andrew Goldstone, MD, pediatric cardiac surgeon at NYP/Columbia, learned about the organization’s work through Adanna C. Akujuo, MD, cardiac surgeon at Albany Medical Center and medical director of VOOM. They met years ago in training when as a medical student Dr. Goldstone was on rotation with Dr. Akujuo, then a fellow.

“She told me ‘For every adult patient I see in Nigeria that needs heart surgery, there are ten children that need surgery and just don’t have access to it. One in 100 kids have congenital heart disease,’” says Dr. Goldstone. “When she told me that statistic I asked ‘How do I get involved and who do I need to bring?’”

Dr. Akujuo’s answer was to bring everything he would normally need to do heart surgery on children. “So, I brought Columbia to Nigeria,” says Dr. Goldstone. “Really, I did! OR nurses, anesthesia, pediatric cardiology, perfusion. I brought my surgical fellow. Many nurses from MSCHONY [Morgan Stanley Children’s Hospital] came, even our head nurse. It was incredible.”

In ten days’ time they planned to do five surgical cases. The team began evaluating patients on day one, but word caught quickly that a pediatric heart surgeon was on the ground and streams of children started showing up for care. “It’s rare that you see a kid begging for surgery, and it was very hard to turn people away, though we still had to,” says Dr. Goldstone.

“But once we were in it, we pushed ourselves to the absolute limit,” he says. “We ended up doing 14 cases, and were helping teach local teams there too. What we accomplished is all due to my team regularly going to 1am every night. They’re also the ones who knew to bring more supplies.” 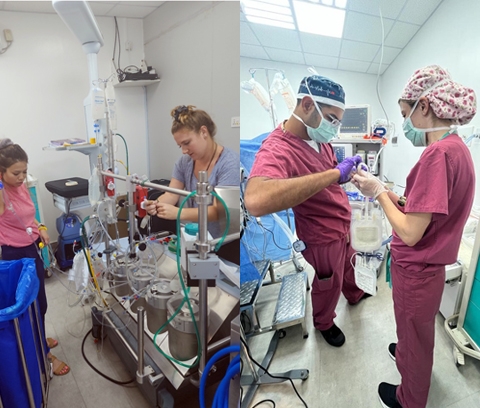 Dr. Goldstone focused mostly on more complex congenital diseases. Not so complex that it was too risky to do under the circumstances in Nigeria or would require children to have long hospital stays, but complex enough that adult cardiac surgeons are not trained to do them.

“The majority of the operations I did were some form of tetralogy of Fallot repair. It is the most common cyanotic [meaning it causes deficient oxygenation of the blood] birth defect in the United States, and probably also the world. Here, we correct it in infants,” explains Dr. Goldstone. “But most of what we’re dealing with in Nigeria are uncorrected tetralogy of Fallot. Stages of disease, natural histories of disease that we rarely ever see in the U.S. That we’ve never actually seen personally.” 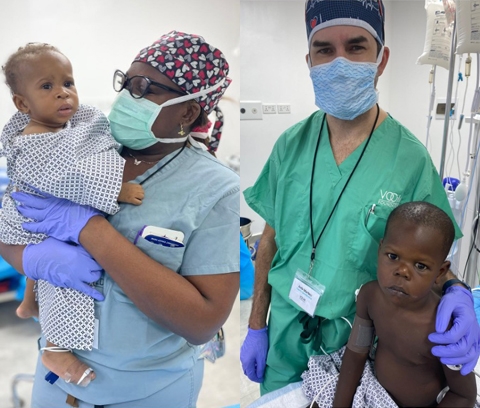 Tetrology of Fallot is a unique and severe anomaly that refers to four related heart defects that often occur together:

They treated patients ranging from an infant to 15 years old. And when you start to understand how these children have been living with advanced disease, it’s hard to comprehend. “These kids have to squat all the time just to get enough blood flow to their lungs,” says Dr. Goldstone. “And every single one of them walked out of the hospital.”

For a few of the children, making it to surgery wasn’t a given. “There were a couple kids who almost died right in front of us the night before surgery,” he says. “And now, a lot of them are cured and won’t need future operations. I think it’s because of how strong they are. They were the ones who were able to survive for so long.” 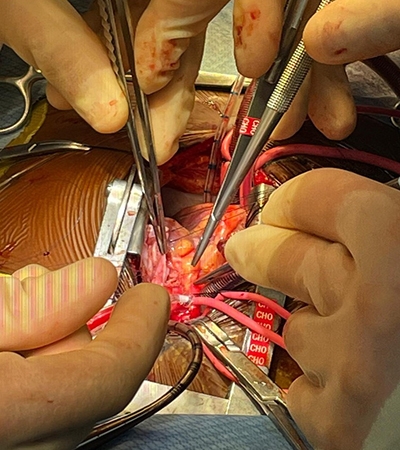 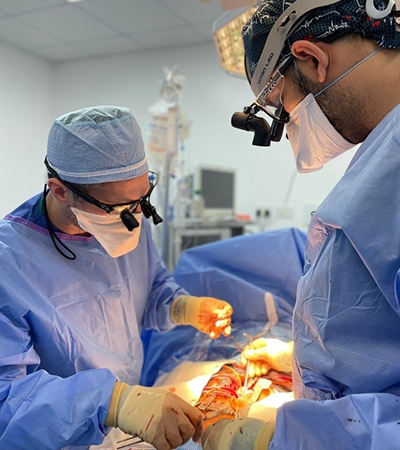 For these severely sick kids, the team had to calculate treatment differently too. In the United States, pediatric heart surgeons can operate under the premise of re-operation being possible. It’s often part of treatment as children grow and their hearts become full-sized.

“I had one 11-year-old with end-stage tetralogy of Fallot. There was very little blood flow getting to his lungs, even the squeezing function of his heart was reduced, very cyanotic, had an infection. He was super high risk,” explains Dr. Goldstone. “Since our group operates by consensus there was a bit of debate on if we should proceed, but in the end, we decided to offer him the surgery. And he did great. So great that it changed my mind about what you can do. I mean, that kid walked out of the hospital.” 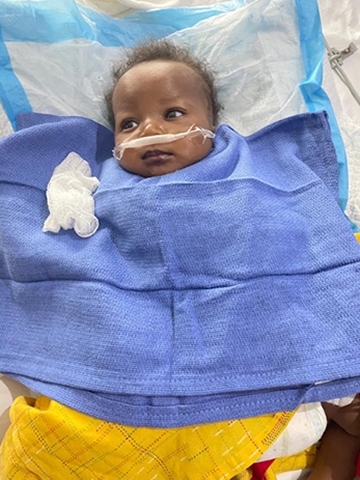 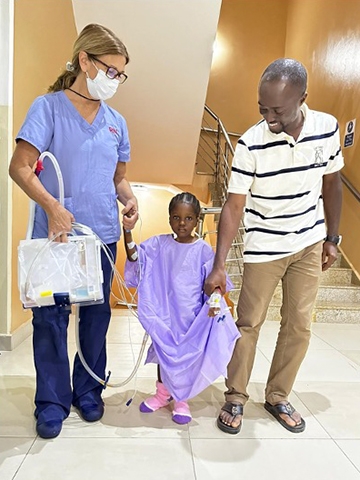 “I was so confident in our team and the hospital team we were working with there that we decided to do a four-kilo infant with tetralogy of Fallot,” says Dr. Goldstone. “I was concerned that they would need their pulmonary valve removed during surgery and concerned how they would fare postoperatively in the ICU [intensive care unit] after we left.”

“But I had read this paper and saw this presentation from a surgeon in Iran where he uses the right atrial appendage to recreate a new pulmonary valve for these kids,” continues Dr. Goldstone. “So, I did that, and it actually worked.”

It worked so well that Dr. Goldstone is bringing it back to the U.S. with him. “It’s something I’ll do now if I have to get rid of the pulmonary valve,” he says. “That kid was off the ventilator within an hour of surgery, and went home shortly after we left.”

The experience also created unbreakable bonds. Bonds between the Columbia team who are already planning their trip back next year. Bonds with the surgical teams on the ground in Nigeria. Bonds with the entire medical group that traveled with VOOM, both on the adult and pediatric side. And bonds with the families, children, and local community. 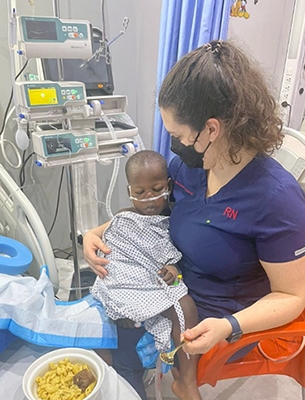 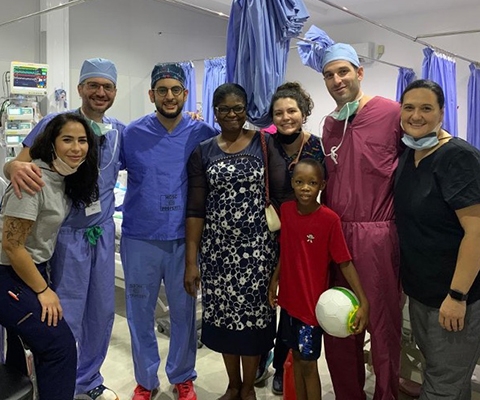 “We all really connected. And one of the most incredible parts were all the parents who didn’t know each other going into this, but they grouped together and took care of each other’s children,” says Dr. Goldstone. “That 11-year-old I mentioned earlier lost both of his parents in a tragic motor vehicle accident, and if he was crying because he was uncomfortable or homesick they would all care for him, console him. It was an amazing thing to see.”

It was such a rewarding mission that Dr. Goldstone is still processing how much it has affected him and how privileged he feels to have done it. “It's very easy as a physician in the United States, especially in New York I think, to get caught up in the stuff outside of medicine because we're hounded by it—whether documentation, billing, et cetera,” he says. “This reminded me of why I became a doctor. Just helping people. It makes me appreciate my job all the more coming back.” 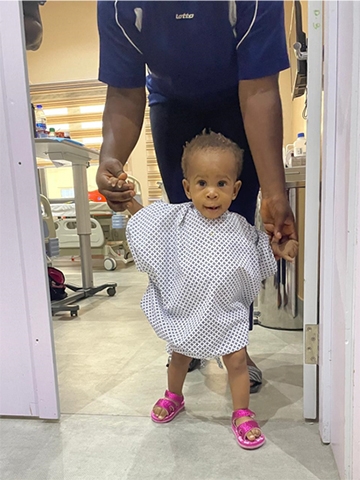 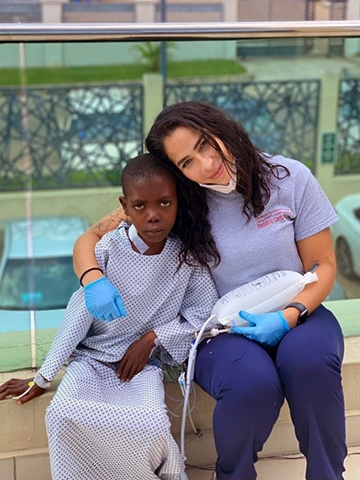 “And more than anything it makes me appreciate my team. Our approach requires an outstanding team beginning to end,” says Dr. Goldstone. “That's something very special about MSCHONY, Columbia and NYP in general. The people here are so dedicated. To see that dedication in Nigeria was just amazing, heartwarming. It gives you all the feels.”

Don’t miss an update on news and content from Healthpoints, the blog from the Department of Surgery at Columbia