Please welcome Dr. Nigel W. Bunnett, who has joined the Department of Surgery as of August 8, 2016. 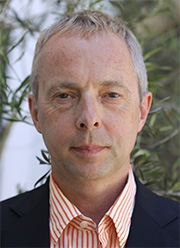 The Departments of Surgery and Pharmacology are pleased to welcome Nigel W. Bunnett, B.Sc., Ph.D., an internationally known expert on the mechanisms of pain, itch and neurogenic inflammation.

These three processes are essential for survival. Pain allows awareness and avoidance of danger, itch evokes scratching that removes noxious substances from the skin, and inflammation protects against infection. “Normally, these processes are tightly controlled and short-lived,” says Dr. Bunnett. “During disease they can become dysregulated and inappropriately sustained.”

One in five individuals suffers from chronic (sustained) pain at some stage of their lives, chronic itch is usually resistant to therapy, and chronic inflammation underlies globally important diseases, such as atherosclerosis, obesity, diabetes and cancer.

“I seek to understand the role of receptors and channels in the normal mechanisms of pain, itch and inflammation, and to determine how their functions become dysregulated during disease,” says Dr. Bunnett. “By identifying the major mechanisms of chronic pain, itch and inflammation, we aim to develop more effective and selective treatments for diseases that are a major cause of human suffering.”

Dr. Bunnett was educated at Cambridge University where he received his Ph.D. degree in 1981. He spent the next thirty years on the West Coast of the USA, as a post-doctoral fellow at the University of California, Los Angeles, and then as Assistant Professor at the University of Washington, Seattle. In 1987 he joined the University of California, San Francisco, where he became Professor of Surgery and Physiology, Vice Chair of Surgery, and Director of the UCSF Center for the Neurobiology of Digestive Diseases. In 2011, Dr. Bunnett moved to Monash University, Melbourne as NHMRC Australia Fellow, Professor of Pharmacology and Medicine, and Deputy Director of the Monash Institute of Pharmaceutical Science.

Dr. Bunnett has published approximately 350 research articles, reviews and chapters, which have been cited over 25,000 times. His contributions have been recognized by awards including an Australia Fellowship, an NIH MERIT Award, the Novartis Neurogastroenterology Award, the Jansen Award for Basic Research in Gastroenterology, and the Victor Mutt Award for Research in Regulatory Peptides. Throughout his career Dr. Bunnett has been committed to medical and graduate education, and he has received numerous awards in recognition of his dedication to teaching.