Center for Liver Disease and Transplantation

The Liver and Its Functions

The liver is the largest solid organ in the body. It removes toxins from the body’s blood supply, maintains healthy blood sugar levels, regulates blood clotting, and performs hundreds of other vital functions. It is located beneath the rib cage in the right upper abdomen.

Functions of the Liver

The liver is an essential organ of the body that performs over 500 vital functions. These include removing waste products and foreign substances from the bloodstream, regulating blood sugar levels, and creating essential nutrients. Here are some of its most important functions:

Anatomy of the Liver

The liver is reddish-brown and shaped approximately like a cone or a wedge, with the small end above the spleen and stomach and the large end above the small intestine. The entire organ is located below the lungs in the right upper abdomen. It weighs between 3 and 3.5 pounds. 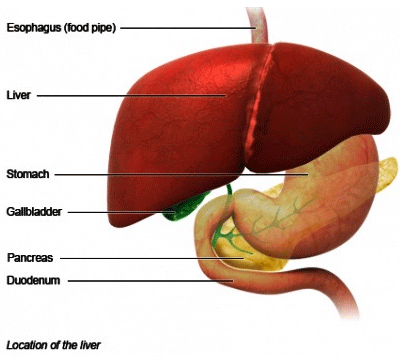 The liver consists of four lobes: the larger right lobe and left lobe, and the smaller caudate lobe and quadrate lobe. The left and right lobe are divided by the falciform (“sickle-shaped” in Latin) ligament, which connects the liver to the abdominal wall. The liver’s lobes can be further divided into eight segments, which are made up of thousands of lobules (small lobes). Each of these lobules has a duct flowing toward the common hepatic duct, which drains bile from the liver.

The following are some of the most important individual parts of the liver:

The best way to avoid liver disease is to take active steps toward a healthy life. The following are some recommendations that will help keep the liver functioning as it should: